Earlier today, Jon Ralston tweeted that the union bosses at the Nevada State Education Association and the AFL-CIO will be filing a margins-tax initiative. If passed, the initiative would institute a two-percent tax on all business revenue over $1 million after some deductions and collect about $1 billion every two years.

Our formal press release is coming soon, but here’s essential background information on this initiative, why it would harm the economy and do nothing to improve education in Nevada.

In this sense, the margin tax can be thought of as a modified gross-receipts tax: The tax is based on gross receipts, but offers an array of possible deductions. Indeed, Indiana University tax scholar John L. Mikesell has appropriately referred to the margin tax as a “badly designed business profits tax . . . combin[ing] all the problems of minimum-income taxation in general – excess compliance and administrative cost, penalization of the unsuccessful business, undesirable incentive impacts, doubtful equity basis – with those of taxation according to gross receipts.”

The Tax Foundation calls gross-receipts taxation “distortive and destructive,” because such taxes “pyramid,” as they are assessed at every level of production. Thus, highly complex goods that require multiple stages of production are repeatedly subjected to the tax. This results in a higher effective tax rate on more complex goods, which distorts consumer behavior and leads to a loss of wealth.

Don’t mess with the Texas mess:

The Nevada Policy Research Institute recently interviewed Will Newton, executive director of the Texas office of the National Federation of Independent Businesses, regarding Texas business owners’ experience with the tax.

Newton: Small businesses in Texas are struggling mightily under the margins tax. After the legislature enacted this tax in 2007, many companies had their tax burden increase tenfold and a survey of our members showed that 40 percent of them saw an increase in their state tax liability of over 500 percent.

Regardless of rate structure, all gross receipts taxes feature tax pyramiding, which distorts and interferes with business investment decisions. Sales, individual income and property taxes do not have the same tax pyramiding feature, making them more economically efficient. An increase in any of those taxes would cause far less economic harm than a gross receipts tax that raises the same amount of revenue.

Analysis shows little to no correlation between education spending and student achievement:

The following state-by-state analysis shows that there is no statistically significant correlation between spending and student achievement. This is seen when Fiscal Year 2009 spending on current expenditures is compared with reading and math scores on the 2009 National Assessment of Educational Progress (NAEP). 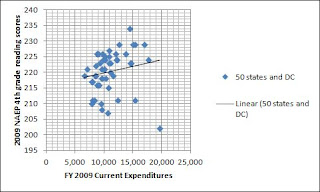 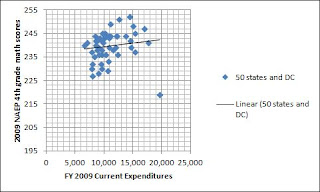 These simple regression-analysis charts report the correlation of state education spending with student performance on the NAEP fourth-grade reading and math tests. Assuming a 95 percent confidence level, they yield R2 values of 0.03172 and .01822, respectively. Also called the coefficient of determination, R2 is one of the best means for evaluating the strength of a relationship.

In these cases, the correlation between spending and student achievement is, at best, only 3.18 percent and 1.82 percent, respectively. This extremely weak relationship is graphically demonstrated by the fact that the data points are not closely grouped along the regression trend line, but are literally all over the charts.

Some commentators, such as Agenda co-host Hugh Jackson, have claimed that because some top-spending states, like Connecticut, New Jersey and Vermont, boast high test scores, a correlation exists between spending and student achievement. Liberals like Jackson, however, ignore the top-spending locales that boast low test scores, such as Washington, D.C., Alaska and New York.

No doubt the union misinformation machine is already in high gear. Now you have the facts the cut through their spin.